Whatever the size or style of computer game to record for, whatever animated TV commercial, Ident or Sting – Magic Sound Records - Mexico can handle your project recording and sound design requirements.

Where there is a cut in the picture, there is often a mismatch or break in the audio. When the camera changes perspective or you cut to another take, there tends to be an audible shift in the production sound tracks.

Sound editing is the process of smoothing out these mismatches to create continuity within a scene as well as removing unwanted clicks, pops and other unwanted noise from the production audio. The last thing you want is for your audience to be distracted by bad sound. Production sound frequently requires editing in order to produce a clean, consistent audio track. Proper sound editing will save you valuable time (and money) when it comes time for the final mix.

George Lucas famously declared that, “Sound was 50 percent of the moviegoing experience.” Whatever your own experience dictates, sound is very important to a video production. Sound is music, or sound effects or natural sound. It all makes a big difference in how a viewer is moved and motivated. At Magic Sound Records - Mexico we believe in optimal sound. That is full enough to be heard, big enough to be supportive, yet balanced to not overrun the communication.

Commercial or feature; training or marketing; a good sound design job can really make the difference in the effectiveness of a production. At Magic Sound Records - Mexico, we love sound design!

Sound design is one of the most important parts of the audio post production phase, as it can provide the right emotion for your production. Think of any T.V. promo or radio spot. One thing they all have in common is the impact that audio has on the overall mood of the production.

Automated dialogue replacement (ADR) is another audio post production that we can handle for you. A good example of ADR, also known as dubbing or looping, is when James Earl Jones did the voice for Darth Vader in Star Wars. In post production, Jones provided his voice which was added to the movie in place of the original actor’s voice.

There are a number of applications for ADR services aside from this example, however. Occasionally, audio on a production set has to be recorded after due to poor quality of loud background noise. This is how video translation works as well. If the production needs to be converted into another language, Magic Sound Records - Mexico will record the new audio and match it up with the original video or animation.

This is the final step in the post production audio process. The mixing process brings together all audio elements of a project: dialogue, sound effects, foley and music to create a soundscape that matches the desired visual aesthetic. It is this careful construction of sounds that can make a project of any budget sound like a big budget film.

The purpose of foley is to either complement or replace sounds recorded on set with new sound elements recorded in a more controlled environment. This is particularly useful for subtle movements that are normally accompanied by a sound (such as footsteps) to give the audience a more realistic and immersive listening experience. For bigger effects, or effects that are difficult to create in a studio, we also offer custom SFX recording.

While SFX libraries are a great resource for finding sound effects to bring life to your film, there will always be certain parts in every project that require the creation of custom sounds. This is where SFX and foley recording come in.

Aside of creating bespoke sound effects we have a library of over 90,000 pre recorded sound effects. Audio is arguably the most important aspect of any production, whether that be a video game, film, or TV commericial. The quality of the sound will affect the viewer's opinion of it more than video can, believe it or not. Unfortunately, many people focus solely on the video quality and don’t end up with what they expected. Luckily, with Magic Sound Records - Mexico audio post production services, you can avoid this. 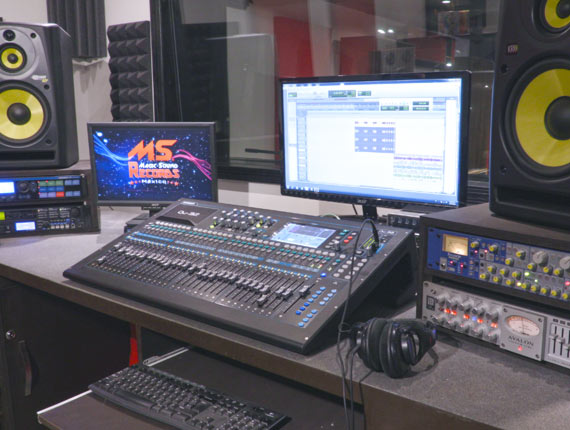 Audio Post-Production services in Mexico to the world.

Get the best possible quality for your budget!. We offer competitive rates for your project and because we are sure you will have a great time recording at Magic Sound Records - Mexico, we offer our new clients 25% off their first session with us. So, what's holding you back? For more information contact us.

Contact Us
© Copyright Magic Sound Records - México All Rights Reserved.
Back to Top